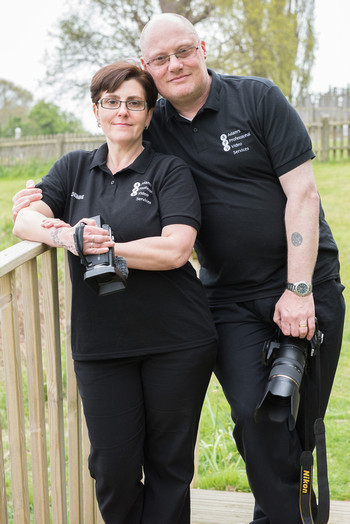 Specialising in documentary style wedding videography and photography and based in Cowes on the Isle of Wight, APV Services is a family business comprising of photographer/film producer, Adam Pearson LBIPP and his videographer wife Debbie.

After initially training as a photographer, Adam has been dabbling in video filming since 1984 and set up his business in 2006. Since then we have produced over 200 wedding videos. We have even travelled as far as Newcastle Upon-Tyne to photograph a wedding. We film with at least two, sometimes more 4K capable cameras. Our cameras are small and compact and people find them less intimidating, it is not the size of the camera that creates a professional production it is the videography, editing and post production. We try to produce a video that helps you recapture the images and sounds of your day, with your own choice of music placed over certain sequences. Our style of videography is described as documentary as we produce a comprehensive production of the day.

Since we first began producing wedding videos we have photographed our couples so as they could have their images on disks and covers. After gaining admiration for our once free photography we decided to add it to our range of services and invested thousands in equipment. We use high-end cameras/lenses and editing software.

In December 2017 we produced our 200th wedding production. Louise and Tom's wedding was also featured on Say Yes To The Dress UK series 3 episode 17. We were asked to provide our footage for the day and it was included in the episode. So now we have the tag As Seen On TV.

Debbie Pearson was a second videographer from day one and over our 200 + wedding productions has gained an eye for detail that is the key to our success. She also has a bag of emergency items like mints, crochet hook and even confetti. She has been our primary videographer for the last 4 years.

In March 2018 Adam submitted some photographs that were assessed by the British Institute of Professional Photographers and was granted provisional membership of the organisation. This will lead to development in our photography business. Recognition of Adam's work by the BIPP is something we are very proud of but most of all, recognition of our work by our customers is paramount.

In January 2019 APV Services were awarded a Silver Certificate of Excellence in Bridebook.co.uk's Wedding Awards for 2019.   Bridebook awards are compiled using reviews and recommendations from real weddings over the past year

Licentiateship at the British Institute of Professional Photography

REMEMBER: YOUR WEDDING DAY WILL GO BY IN A FLASH. A VIDEO HELPS TO PRESERVE MEMORIES OF YOUR DAY FOREVER